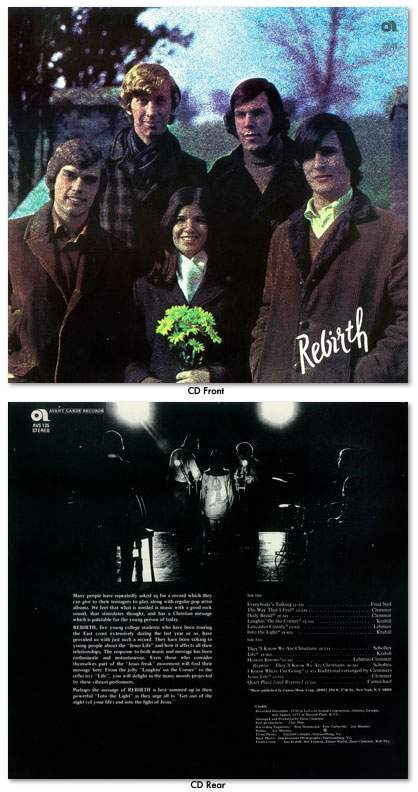 After 45 year on vinyl, Rebirth is emerging again with this re-release of their third and final self-titled album. This re-release faithfully reproduces the look and sound of the original vinyl album, which was originally released by Avant Gard Records as AVS-135. This re-release includes all 12 tracks: Jay Messina, an award-winning sound engineer who worked as an engineer on the original album, provided consulting advice in this re-mastering of this album

​About Rebirth
​As unknown college troubadours in 1969, the band (Jim Krabill, Mel Lehman, Elaine Warfel, Dean Clemmer, and Rob Eby) would never have predicted the success to come. That success led to two national tours and several recordings. And the rest is history.

​As seniors at Eastern Mennonite College (now University), they peaked with a recording contract and an offer of a one-year touring contract from a national campus ministry. They graduated, took a VW bug and their music to state-of-the-art studios in Atlanta NYC and made their third and final recording. Their original songs and powerful arrangements of folk and Christian rock classics won them devoted fans still loving them today. But then the magic died as they all pursued separate careers.